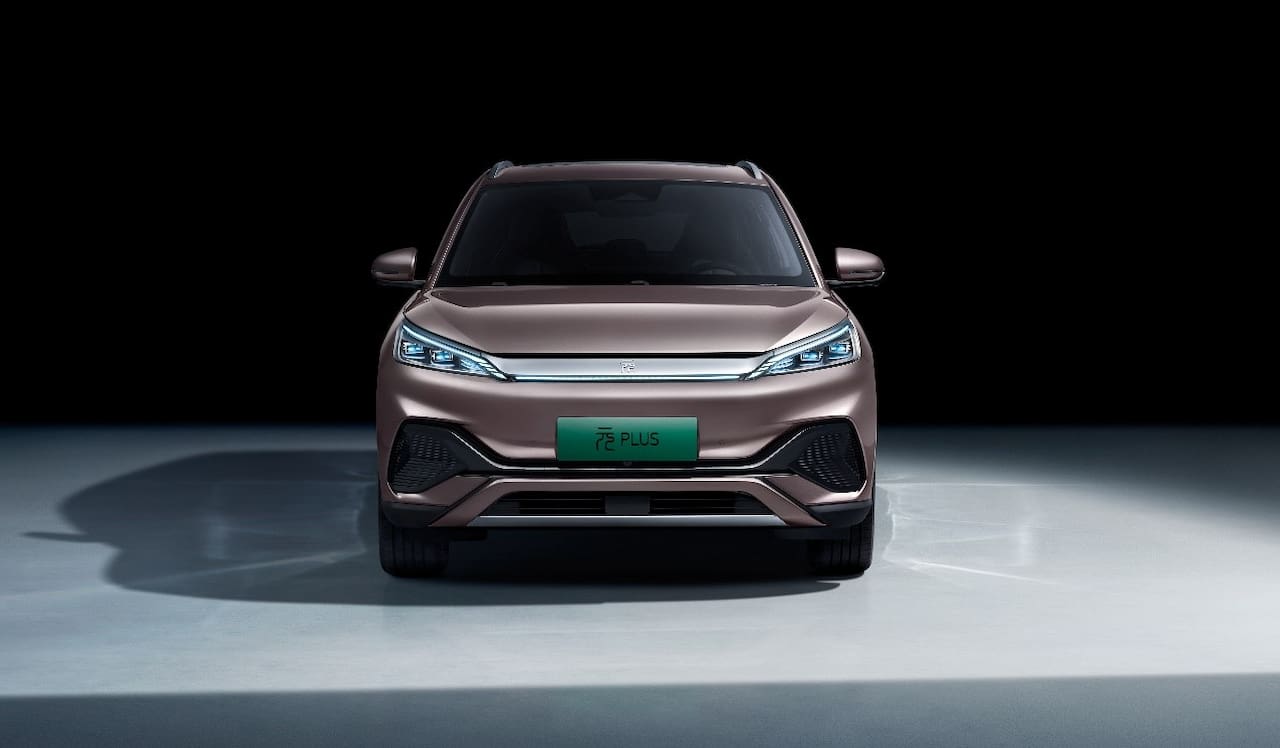 Warren Buffett-backed Chinese automaker BYD unveiled a compact SUV, the BYD Yuan Plus, in 2021. It will be the company’s next big electric car launch in Europe following the BYD Tang EV that went on sale in Norway in August 2021. It will carry the BYD Atto 3 nameplate in the Old Continent.

Here’s everything you need to know about the new BYD electric car.

The BYD Yuan Plus embodies the company’s latest design language called Dragon Face 3.0, but there’s no denying that it looks like a typical Chinese SUV. Some design highlights include crossover bodywork with elements like a sloping bonnet and a dropping roofline, LED “dragon crystal” headlamps, C-shaped, aggressive front bumper corners, and a full-width taillamp. However, the D-pillar motif catches our attention, reminiscent of the diamond-pattern film in the honeycomb look on the VW ID.3.

The Yuan Plus follows a new Rhythm theme for the interior, and we observe the musical influence in the curvy shape of the dashboard and the round elements on the doors. The dashboard appears to seamlessly merge with the door panels to give a single-panel effect. The red strings in the lower portion of the door panels amplify the feeling of being around musical instruments.

The digital cluster is a compact unit reminiscent of the VW ID.4. In addition to the stubby gear selector with a capsule-shaped top, the front-center and rear AC vents have an aircraft-inspired design. There are plenty of silver inserts on the interior elements.

The BYD Yuan Plus features a 12.8-inch floating touchscreen infotainment system, a three-spoke steering wheel with a flattened bottom, and a compact 5-inch virtual instrument cluster. The floor console is flat and low, and it has a mobile storage space and a dual cupholder.

Full capabilities of the BYD e-Platform 3.0

The Yuan Plus sits on the new BYD e-Platform 3.0 platform, which debuted in the BYD Dolphin (BYD EA1). This platform packs the “ultra-safe” BYD Blade Battery and a heat pump as standard. 800-volt system voltage, 0-60 mph (0-97 km/h) acceleration time of 2.9 seconds, and a range of 600 miles (966 km) are the best possible parameters with this platform, but then not all of it is applicable to the Yuan Plus.

BYD offers the Yuan Plus in China in two variants, with a range of 430 km and with a 510 km range. Needless to say, these are liberal NEDC figures. All variants are powered by a single motor generating 150 kW (204 PS) of power and 310 Nm of torque.

BYD had commissioned a modified version of the Yuan Plus for promotions at the 2021 Guangzhou Auto Show. The company had painted it in a funky shade of green, which should have surely attracted the visitors’ focus. Special livery, including the brand’s punchline “Build Your Dreams,” unique graphics, rally-style multi-spoke wheels from rotiform, and a rear diffuser were the other exterior changes that made the modified version sportier. BYD hadn’t revealed plans to launch the modified Yuan Plus for customers.

The interior of the modified Yuan Plus wasn’t much different from the regular model. BYD used carbon-fiber trim on its steering wheel and added a special sound system in its trunk, consisting of what looked like four speakers and two subwoofers. A green panel with strings on the top of the speakers aligned the exterior theme color to the interior.

BYD models overseas get market-specific alphanumeric names starting with the word ‘Atto’ and the first of them is the BYD Atto 3. CCS2 charging is another change for the export markets.

Nexport-owned EVDirect.com.au is the official BYD importer in Australia and New Zealand. The first BYD showroom in Australia is located in Darlinghurst, a suburb in Sydney. Like the Yuan Plus, the Atto 3 is available in a standard range variant and an extended range variant.

The Driven has reviewed the Chinese-spec Yuan Plus on Aussie roads and shared some interesting observations. Its first impressions suggested that the EV is developed for relaxed driving in urban conditions.

The suspension setup is soft and purely comfort-oriented, although there is some room for improvement when it comes to damping control. The Yuan Plus doesn’t take heavy loads or poor roads well. The steering, too, is designed to tackle the urban driving conditions with ease, not for spirited highway driving. The tires seem they need to handle torque better under heavy acceleration at the start and they could use some grip on rainy roads, too. The RHD, Australian-spec Atto 3 could be a little different and incorporate changes based on the feedback from local journalists.

Luke Todd, CEO, EVDirect.com.au, has said that Australia gets the Atto 3 in a fully-loaded, standard trim, and so, there’s no need to check any options while placing the order, as per a report from The Driven. The main selection is the battery option.

Only three colour options are available: white, grey, and blue. However, Todd has said that that number could increase to five or six in the future. Previously, Todd had told The Driven that the Yuan Plus/Atto 3 is designed to meet 5-star ANCAP ratings. Below are the Australian specifications:

The Atto 3 is available in Australia online on EVDirect.com.au and at Eagers Automotive dealerships. However, no matter which way the customers buy it, the prices are fixed. The Atto 3 costs AUD 44,381 in the standard-range variant and AUD 47,381 in the extended-range variant.

BYD Australia General Manager Wing You said that the company has received more than 3,000 orders for the Atto 3, CarExpert reported on June 29, 2022. According to a report The Driven published on May 13, 2022, the assembly line in Shanghai which makes the Atto 3 (RHD spec) can roll out 1,200-1,500 cars a month. Customers ordering the Atto 3 now could have to wait until 2023 for deliveries, The Driven said in a report on July 7, 2022.

BYD has allocated 3,000 units of the Atto 3 to Australia initially. EVdirect.com.au has received the first shipment of the Atto 3, as per a post dated August 11, 2022, on its Facebook account. The first batch consists of 1,000 units, and the rest could arrive by the end of 2022. Customer deliveries of the Atto 3 in Australia have commenced.

With the launch of the Atto 3, BYD has entered New Zealand. There are four BYD showrooms in NZ, located in Auckland, Botany, Hamilton, and Tauranga.

Customer deliveries of the Atto 3 in New Zealand have begun. According to an announcement BYD made on June 23, 2022, announced, it is only delivering the extended range variant. The standard range variant will become available by December 2022.

BYD has launched its electric SUV in the Southeast Asian island of Singapore. E-Auto, a Vantage Automotive division and a Sime Darby Motors group member, is the company’s official dealer in the country. Due to the tariffs, Atto 3 is exorbitantly expensive, costing SGD 178,888, and that’s a price that includes a trade-in of an old car, as per a Top Gear Singapore report dated July 8, 2022.

As per a tweet from BYD Global, the company launched the Yuan Plus as the Atto 3 in Macau on April 7, 2022. Hong Kong is ramping up its efforts to transform its mobility sector with sustainable propulsion systems. BYD dealerships in the region are looking to bring more electric models to their showrooms as a part of the effort, claim local reports.

The BYD Atto 3 will make its European debut at the 2022 Paris Motor Show (October 17-23, 2022). BYD has revealed that it will offer the Atto 3 in Europe in the extended range variant and that the WLTP range of this variant will be 420 km (261 miles). The company is yet to disclose the launch timeline.

Belonging to a popular segment and developed keeping global markets in mind, the BYD Atto 3 can significantly change the brand’s perception and increase its popularity overseas. It offers a notably higher range and better performance over the older MG ZS EV, which is comparatively more expensive in some markets. The new Chinese electric SUV has the potential to become a popular choice among budget EV customers in many of BYD’s overseas markets, including Australia, New Zealand, and European countries.

What is the BYD Atto 3 release date?

Customer deliveries of the BYD Atto 3 in Australia begin in August 2022. BYD has not confirmed the model for Europe yet.

Which are the BYD Atto 3 rivals in Australia?

The MG ZS EV, Hyundai Kona EV, and the Kia Niro EV are current segment options for customers shopping for an electric crossover-SUV.

What is the BYD Atto 3 price in Australia?

The BYD Atto 3 starts at AUD 44,900 driveaway, undercutting the MG ZS EV by a small margin. 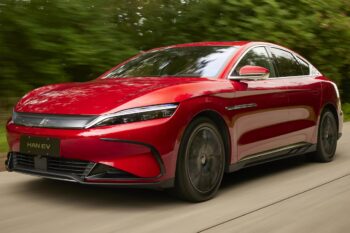 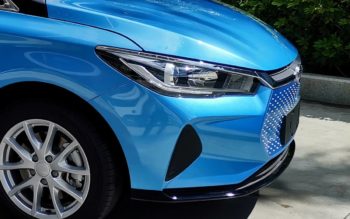 BYD is moving up the ladder, planning to compete with luxury brands. 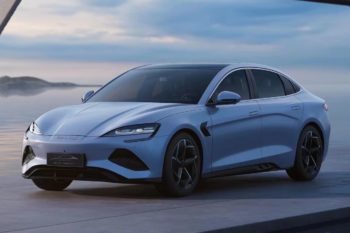