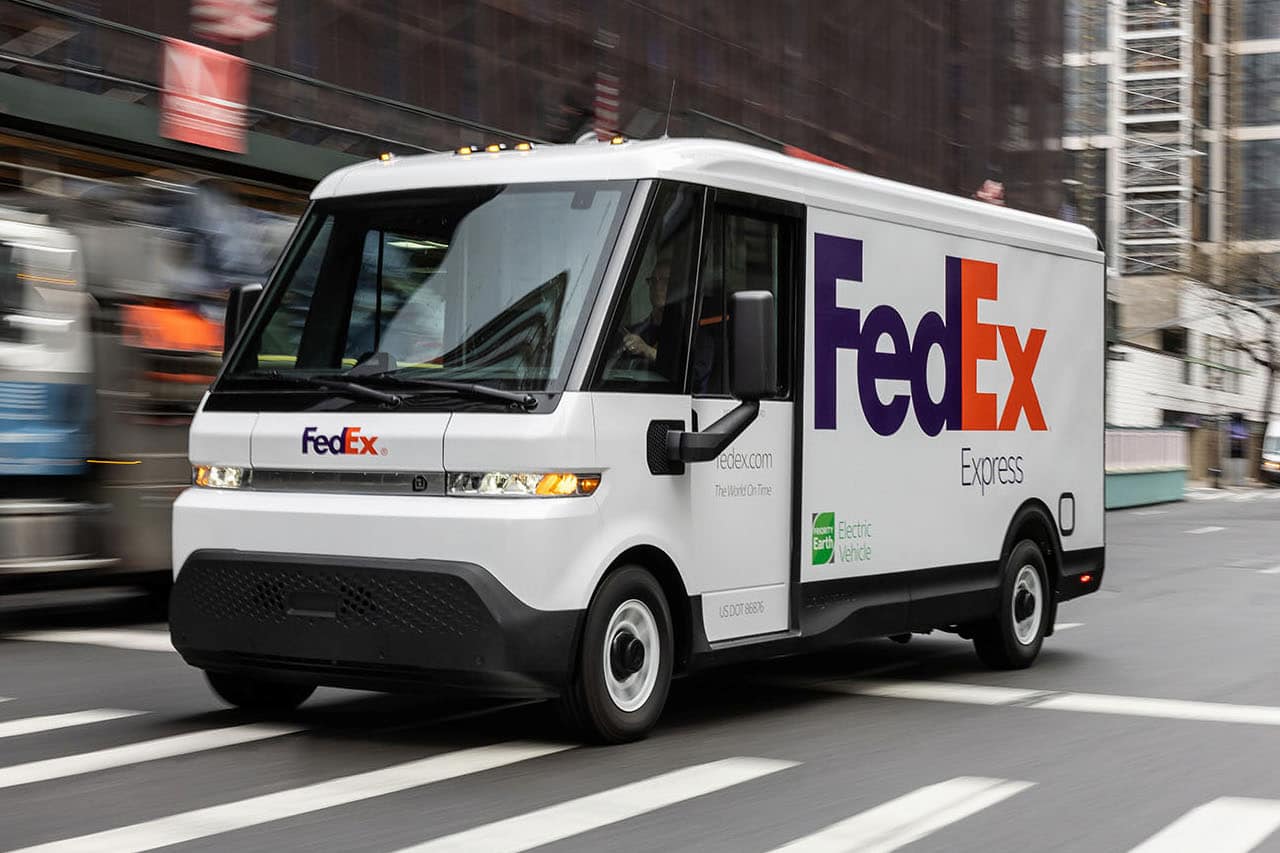 Under BrightDrop, its new brand that caters to the commercial delivery and logistics industry, General Motors unveiled the first model at CES 2021 – BrightDrop Zevo 600 (originally called BrightDrop EV600). Here’s everything we know about the new electric van.

Though big and boxy, the BrightDrop Zevo 600 looks quite contemporary for a vehicle of its type. The slim headlights, the curved surfaces, and the vertically positioned sleek taillights lend a modern touch to the exterior.

Designed as an EV from the outset, the Zevo 600 sits lower than traditional delivery vans, as CNET Roadshow’s Craig Cole notes in his first look video on YouTube (embedded above). Moreover, it has noticeably large doors that are nearly 3 ft. wide. Entering and exiting the Zevo 600, especially with large and heavy packages in the hands, should be easier and safer compared to traditional delivery vans.

Inside, the Zevo 600 is quite appealing, thanks to a minimalist, car-like design. The contemporary design of the dashboard, the free-standing digital instrument cluster and (13.4”) central touchscreen, and the sleek right AC vents and compact central AC vents lend a low-profile, sophisticated styling to the interior. Two roof options are available – translucent and solid. People as tall as 6’4″ can stand up safely in the Zevo 600.

One of the major convenience features of the Zevo 600 for fleet operators is a fleet management platform. They can get a real-time status of the Zevo 600, track it, and apply geofencing to restrict usage outside the designated area. Moreover, it’s possible to manage non-BrightDrop vehicles, which makes the BrightDrop platform a one-stop fleet management solution. Remote Diagnostics and OTA updates allow remotely analyzing vehicle data and fixing certain technical issues in the vehicle. Below are the other fleet management features:

Speaking to Forbes, Zevo 600 Chief Engineer Bill Venner said that GM built the new electric van with learnings obtained from its customers. The company laid emphasis on aspects like the seating position and comfort, the step-in height, and features like iPlay, air conditioning, sliding doors, and a cargo door. Safety, which most van makers don’t pay a lot of attention to, didn’t go unnoticed either. Unlike many commercial vans, the Zevo 600 has airbags, AEB and LKA.

The BrightDrop Zevo 600 is a full-size electric van GM developed in just 20 months, which was a new development timeline record for the company. It enables customers to make tailpipe emission-free delivery of goods and services over long ranges.

GM hasn’t disclosed the energy content of the Zevo 600’s battery pack yet, but it has revealed it’s a 20-module Ultium battery pack that can provide a range of up to 250 miles (GM est.). This battery pack powers two motors that give the EV an AWD drivetrain layout. According to a GM Authority report, an FWD variant with a 24-module battery pack and a single motor is in the pipeline, which should offer a longer range. The Zevo 600 AWD’s peak DC fast-charging rate is 120 kW, and GM estimates charging using that method for an hour should provide 160 miles of range.

BrightDrop driver Stephen Marlin has successfully attempted a Guinness World Records range drive in the Zevo 600. Marlin drove the Zevo 600 for nearly 260 miles in a trip from New York City to Washington, D.C. on a single charge. This is the longest distance an electric van has covered on a single charge. Marlin made stops at some iconic destinations during the trip, including landmarks in Philadelphia and Baltimore.

Ars Technica had a go in the Zevo 600 and shared a short review. The tech publication suggests the electric van misses the refinement one expects from an EV, but given that it’s a commercial vehicle, it doesn’t hold it against the van. It’s easy to drive despite the size, and one-pedal driving works perfectly. The steering is light, and the turning circle is impressively low, which means the electric van scores impressively in maneuverability.

There’s a good amount of connectivity tech and other vital electronics needed in today’s world, and there’s plenty of room. The space between the door and the cargo is particularly wide. The energy efficiency reading on the instrument cluster during Ars Technica’s brief drive was a decent 1.8 miles/kWh over 348 miles. No less than 260 miles of the drive was at highway speed.

Production of the BrightDrop Zevo 600 takes place at a Kuka factory in Livonia (Michigan), USA. GM plans to relocate the production to its CAMI Assembly plant in Ingersoll (Ontario), Canada. During GM’s Q4 2021 earnings conference call, Mary Barra, the company’s Chair and CEO, briefly talked about manufacturing the Zevo 600 at the Canadian factory. She said that the second production site will have an annual capacity of 30,000 units initially and nearly 60,000 units by the middle of the decade.

Additional BrightDrop EV600 (BrightDrop Zevo 600) production begins at CAMI late this year, where we’ll launch with an annual capacity of 30,000 units and the ability to nearly double production by mid-decade.

On April 4, 2022, GM revealed that the production of BrightDrop electric vans at CAMI Assembly plant will commence in December 2022. The company plans to finish retooling the plant by the summer to keep it ready well ahead of the SOP at the end of the year.

GM started retooling and reengineering its CAMI assembly plant in Ontario on April 29, 2022, for the BrightDrop electric vans. The plant is on track to become Canada’s first full-scale electric vehicle assembly facility. According to General Motors, the construction of the building and installation of the production equipment will be done by September 2022. The production of the BrightDrop Zevo 600 starts in Q4 2022 at this plant, while the Zevo 400 will enter production in 2023.

GM plans to have a small dealer network of BrightDrop in the U.S., and it has started opening touchpoints. The company inaugurated its first outlet (BrightDrop Greater Los Angeles) in Fontana, California in December 2021.

BrightDrop Zevo 600 deliveries started in December 2021, with FedEx taking the keys to the first five units. FedEx initially reserved 500 BrightDrop electric light commercial vehicles, and these are a part of that order. Later, the company made a reservation for 2,000 BrightDrop electric delivery vans. Further ahead, it could add up to 20,000 additional BrightDrop EVs.

Walmart has also decided to purchase BrightDrop electric delivery vans, and it has signed an agreement to reserve 5,000 units of Zevo 600 and Zevo 400 (a midsize electric LCV) combined. Merchants Fleet is also among the customers of BrightDrop electric vans. GM says that it has more than 25,000 reservations for BrightDrop EVs, and the Rivian EDV 700 (Rivian Amazon van) is the closest competitor of the Zevo 600.

On May 10, 2022, GM Authority reported that its photographers spotted two BrightDrop Zevo 600 electric vans parked at Amazon’s Robotics Fulfillment Center in Pontiac, Michigan. Amazon has placed an order for 100,000 Rivian electric vans, but there are no official reports of the e-commerce giant considering the BrightDrop Zevo 600. Amazon might be looking to diversify its electric vans range by testing the EV for its future delivery operations. Likewise, the Ram Promaster Electric van will be added to Amazon’s American fleet from next year.

GM said in its shareholder letter dated February 2, 2022, that it recorded EBIT-adjusted financial results of USD 14.3 billion in 2021. This will allow GM to invest more in its BrightDrop business and expand its commercial portfolio. GM said that the use of EVs will allow customers to make their delivery operations efficient and green. With GM’s USD 7 billion investment for expansion of battery cell and EV assembly capacity, expect GM’s subsidiaries like BrightDrop to fare even better in the future.

GM will launch BrightDrop in Canada as early as the end of 2022, suggests a new report from Automotive News Canada. The company plans to open the first BrightDrop dealership in Canada before the end of the year, as per the report. “Active discussions” for the first Canadian BrightDrop dealer are on, Steve Hornyak, the brand’s chief revenue officer, told Automotive News Canada on April 20, 2022. It won’t be a widespread network, with Hornyak saying GM plans to have “very select dealers.”

Further, Hornyak said there is interest from Canadian companies to order the Brightdrop electric van models, but made it clear that none have placed an order. Pre-sales of the MY2023 and MY2024 Zevo vans should begin this year in the country, the BrightDrop executive added. 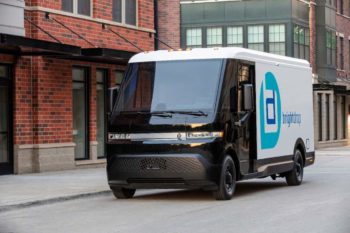 The next vehicle in GM’ new EV line for the commercial delivery and logistics industry is the Zevo 400.