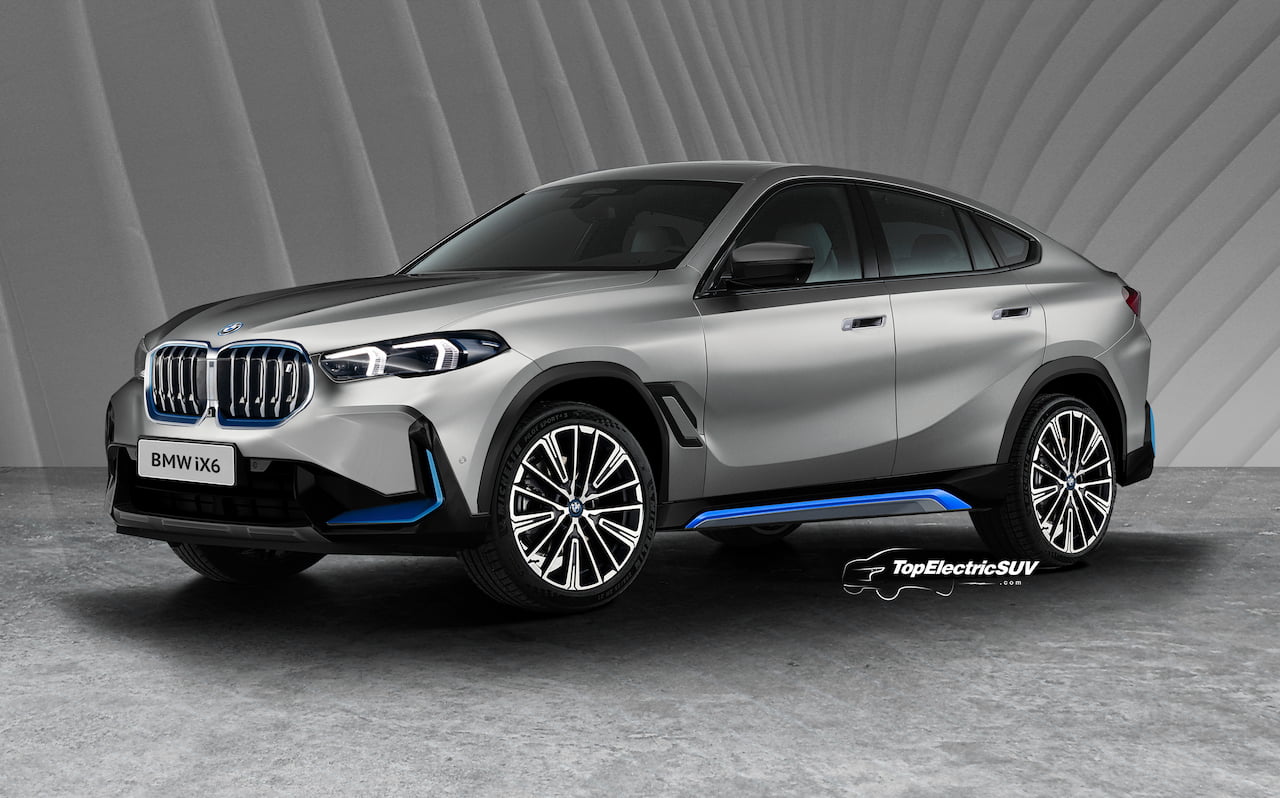 BMW is planning several pure electric SUV and SUV-coupe models to achieve its long-term goal of converting 50% of sales to EVs before 2030. One of the models lined-up will reportedly serve customers looking for a BMW X6 Electric – the BMW iX6. Here’s everything we know about the electric SUV-coupe.

The BMW iX6 is likely to carry the familiar ‘SAC’ DNA for a confident and commanding look. Customers love the edgy and sporty character of the X6, and it’s logical to expect the iX6 to match its striking design. BimmerPost forum member ynguldyn suggests that the iX6 will be a conversion of the fourth-gen X6 (G66). The person familiar with BMW’s plans yet to be made public claims that the iX6 will share the CLAR platform with the next-gen X6. Note that BMW has not offered any information on the electric variants of the X6.

BMW plans to release a wide range of bespoke EVs under a new Neue Klasse family starting in 2025, focusing on mid-size models such as the next-gen BMW iX3, BMW iX4, and the BMW 3 Series Electric. In contrast, the iX6 would be a simpler offering sitting on a modified version of the company’s rear-wheel drive ICE vehicle platform. As per the information on Bimmerpost, while it won’t benefit from the new EV-exclusive platform developed for the Neue Klasse models, it should get the sixth-gen eDrive technology, hardware which is a step above today’s BMWs in efficiency and performance.

The BMW X6 Electric should come with a large battery pack consisting of the new BMW round lithium-ion cells. Compared to the prismatic lithium-ion cells used in the battery packs of the current BMW EVs, these cells will have a higher nickel content and lower cobalt content on the cathode side and also an increased silicon content on the anode side. Their volumetric energy density will be over 20% better.

The highest charging power of the BMW X6 Electric could be around 250 kW, allowing a 10-80% DC fast-charge session in just about 20 minutes. On a full charge, the iX6 should deliver an EPA-est. range of 325-350 miles. It’s too early to talk about power and torque figures, but we think BMW would offer performance levels higher than the X6 M Competition. Expect a 0-60 mph acceleration time of around 3.5 seconds and a top speed of 155 mph (electronically limited) in the electric SUV.

Production of the BMW iX6 should take place at the BMW Group Spartanburg Plant. The seven million-square-foot facility, located in Greer (South Carolina), USA, is getting a billion-dollar infusion to support the production of electric vehicles. Plus, a one-million-square-foot in-house battery assembly facility will spring up just 16 miles away in Woodruff (South Carolina) with a USD 700 million investment.

By 2030, no less than six pure electric BMW models will roll off the assembly line at the Spartanburg plant. Even though BMW Group hasn’t announced, it’s only logical to assume that these models will include the iX6. According to BimmerPost forum member ynguldyn, iX6 production will start in April 2028.

Neue Klasse platform a more logical choice for the iX6?

USD 1 billion will be a sizable investment in the Spartanburg plant. BMW Group could be preparing a completely new assembly line dedicated to Neue Klasse SUVs, and it’d be a shame if a high-end product like the iX6 can’t reap the benefits of that investment.

Some of the CLAR-based EVs like the i3 sedan, iX1, and iX3 don’t have the range or the specs to compete with a Tesla or an Audi e-tron product, and have stayed away from the U.S. market. Neue Klasse-based EVs will be a generational step forward with considerably quicker charging times, higher range, and promise to break new ground in performance, aesthetics and software for BMW. Should the iX6 be a beneficiary, it could be more competitive than a conversion electric vehicle.

The iX6 could celebrate its world premiere at the end of 2027 and begin arriving at U.S. dealerships in spring 2028. The prices of the base iX6 may start close to USD 90,000.

Introduced in December 2006, the BMW X6 opened up a whole new segment in the industry and has long been the company’s wild child in the X line-up. The X6 EV derived from it will likely be sleeker, and quicker off the line. However, the CLAR platform offers some limitations, which means that the electric Sports Activity Coupe may not be as space efficient or advanced as the Tesla Model X.

What is the BMW iX6 release date?

What will be the BMW iX6 price?

Which models will be BMW X6 Electric rivals?

The iX6 will rival the Tesla Model X and Audi Q6 Sportback e-tron.

Featured Image: TopElectricSUV’s illustration of the all-electric X6 based on the current design language.