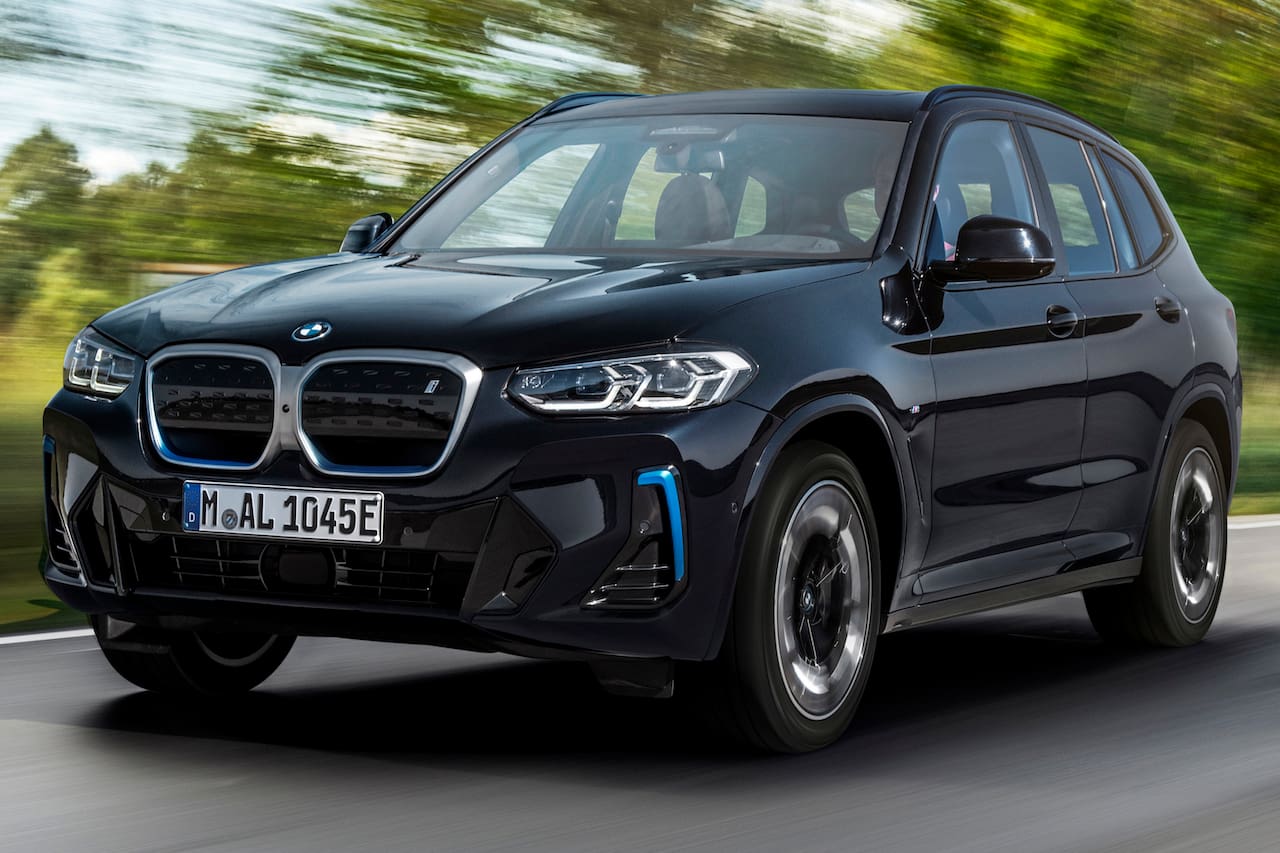 Introduced in July 2020, the BMW iX3, the pure electric variant of the third-gen BMW X3 G01, is just two years old. However, shortly after its donor model, it received a facelift in 2021 to stay up-to-date cosmetically and technically, making this perhaps the fastest model in BMW’s history to get a refresh.

The 2022 BMW iX3 has a more aggressive exterior design, although visual changes are moderate. At the front, the new model has sharper and narrower headlights. The contours of the headlights are around 10 mm slimmer, and this change brings the iX3 closer to the BMW iX and i4.

Adaptive LED headlights with Matrix function, not available even optionally on the 2021 iX3, are standard in the 2022 iX3. Moreover, there is an option to specify Adaptive LED headlights with BMW Laserlight, which includes blue inlays in the L-shaped light elements of the DRLs. The laserlight module increases the high-beam range to 650 meters. The bumper has a new design with a more rugged and larger lower grille and L-shaped side air intake grilles.

The profile is the same, but new alloy wheel options are available. Another small change here is that the designers have omitted the blue accent in the side skirts. At the rear, the new iX3 exudes more aggression through its redesigned tail lamps with pincer-shaped contouring and horizontal turn signal indicators, a modified bumper, and vertical air outlets.

A standard-fit M Sport package makes the 2022 iX3 even more appealing than the old model. The larger lower air intake and L-shaped air curtains with blue accents at the outer edges of the front end that we have mentioned above are part of the M Sport package. This package also includes a 3D surface design on the front apron, the air breathers in the front side panels in an M-specific design, and the new rear diffuser with blue accents.

Inside, the 2022 BMW iX3 has upgraded BMW Live Cockpit Professional with a 12.3-inch touchscreen instead of a 10.25-inch touchscreen. While the control display is bigger, the digital instrument cluster measures the same diagonally – 12.3 inches. The start-stop button is located beside the gear selector instead of beside the instrument cluster. The new iX3’s gear selector is smaller and features a classier design. New air vents with chrome trim and a new sports steering wheel with a single 6 o’clock spoke are also part of the interior changes.

The 2022 BMW iX3’s BMW Intelligent Personal Assistant (voice assistant) accepts voice commands for new functions, one of which is regulating the air conditioning. Opening and closing windows and switching modes to change the driving experience could be among the other possible things.

China NCAP found the iX3 to be very safe and gave it a score of 96.64% for occupant protection, 87.01% for pedestrian protection, and 100% for active safety. These aspects carried a weight of 70%, 15%, and 15%, respectively, in the calculation of the overall safety rating. Considering that the 2022 BMW iX3 is a facelift, we expect the car to keep its score when it is tested.

A noteworthy improvement is that while previously it took 4.1 seconds to accelerate from 80-120 km/h, now it takes only 2.5 seconds. That should make highway driving sportier and safer (with swifter overtakes). As per the UK site, the range in the WLTP cycle is the same as before – 285 miles.

*When plugged into a 150 kW DC charger

On September 22, 2021, BMW Group announced that it plans to equip the iX3 with intelligent thermal management for the battery pack from November 2021. The company will probably offer this new feature directly on the new iX3. Intelligent thermal management automatically begins preconditioning the battery pack for charging when the navigation system foresees a stopover at a high-power charging station. This way, the battery pack gets the necessary heating/cooling in advance to be in the optimal temperature for charging at maximum power by the time the EV reaches the charging station.

In Germany and China, prices of the iX3 have remained unchanged for nearly a year. New vehicles are becoming costlier worldwide because of supply chain issues, inflation, and other factors, and automakers are rolling out price hikes to pass on the increased costs to customers. However, it looks like BMW Group is making an exception for the iX3 in some of its main markets.

This section analyzes the observations made by the international media from the first BMW iX3 reviews conducted in 2020.

The BMW iX3 is an offshoot of the Spartanburg-made mid-size X3, but it comes from Dadong, China, where exports commenced in November 2020. However, there are no concerns, with topgear.com saying that the build quality, materials, and refinement match the U.S.-built BMW X3.

As an ICE vehicle conversion, limitations of the iX3 are evident when put next to a Jaguar I-Pace or a Tesla Model Y. For example, there is no frunk (front trunk) in the Chinese-made German electric SUV. It doesn’t have a mold-breaking design or any of the party tricks that EV startups have perfected. Compromises compared to the BMW X3 include lack of AWD, lower ground clearance, and less cargo space.

Some of the compromises make things better in other aspects, though. As autocar.co.uk points out, the 20 mm lower ground clearance aids the already low center of gravity, which, for the record, is 70 mm lower than that of the BMW X3.

Except for select markets, like New Zealand, the BMW X3 comes exclusively in AWD. Not the electric variant. In the iX3, you can have some typical RWD vehicle fun, and for that, carmagazine.co.uk suggests keeping the recuperation mode in the lowest setting. It also appreciates this BMW electric SUV’s stopping power, stating that deceleration is prioritized and that the stopping power is fully adequate.

The iX3 is no tantalizing Tesla, and it clearly isn’t developed for bragging rights. It takes 6.8 seconds to accelerate from 0-62 mph, compared to the base American BMW X3 (xDrive30i)’s 6.3 seconds and top-end American BMW X3 (M40i)’s 4.5 seconds. A 74.0 kWh Lithium-ion battery pack sourced from China’s CATL and a BMW Dingolfing-made fifth-gen eDrive motor mounted at the rear take the place of the conventional engine and transmission.

Autocar’s iX3 review is positive about the driving performance, praising the fluidic handling, weighty steering, and quick maneuverability. Compared to the BMW X3 xDrive30i or the X3 M40i, we’re looking at an SUV that is 352 kg (776 lb.) or 260 kg (573 lb.) heavier, yet it impresses the British reviewers.

The BMW iX3 range as per Europe’s new WLTP test cycle is 285 miles, and as per the CLTC test cycle that China follows, it is 550 km (342 miles). Top Gear managed to achieve a range of 230 miles during its drive. In daily situations, customers could achieve a higher range. Using an 11 kW AC charger takes 7.5 hours for a full charge. Thanks to the support for a 150 kW DC charger, it’s possible to quick-charge from 0% to 80% SoC in just 34 minutes.

The all-electric iX3 is a solid choice for those who want a no-frills midsize luxury SUV from Germany. BMW never intended to make a Tesla Model Y slayer, and it isn’t pitching the iX3 as one.

There’s no plan to launch the iX3 in the U.S., a company spokesman confirmed in 2021. For now, the larger BMW iX is the only electric SUV for the U.S. from Bavaria.

What will be the new BMW iX3 price?

Which models are the BMW iX3 rivals?

Midsize electric SUVs like the Audi Q4 e-tron, Mercedes EQC, and the Tesla Model Y compete with the new iX3.