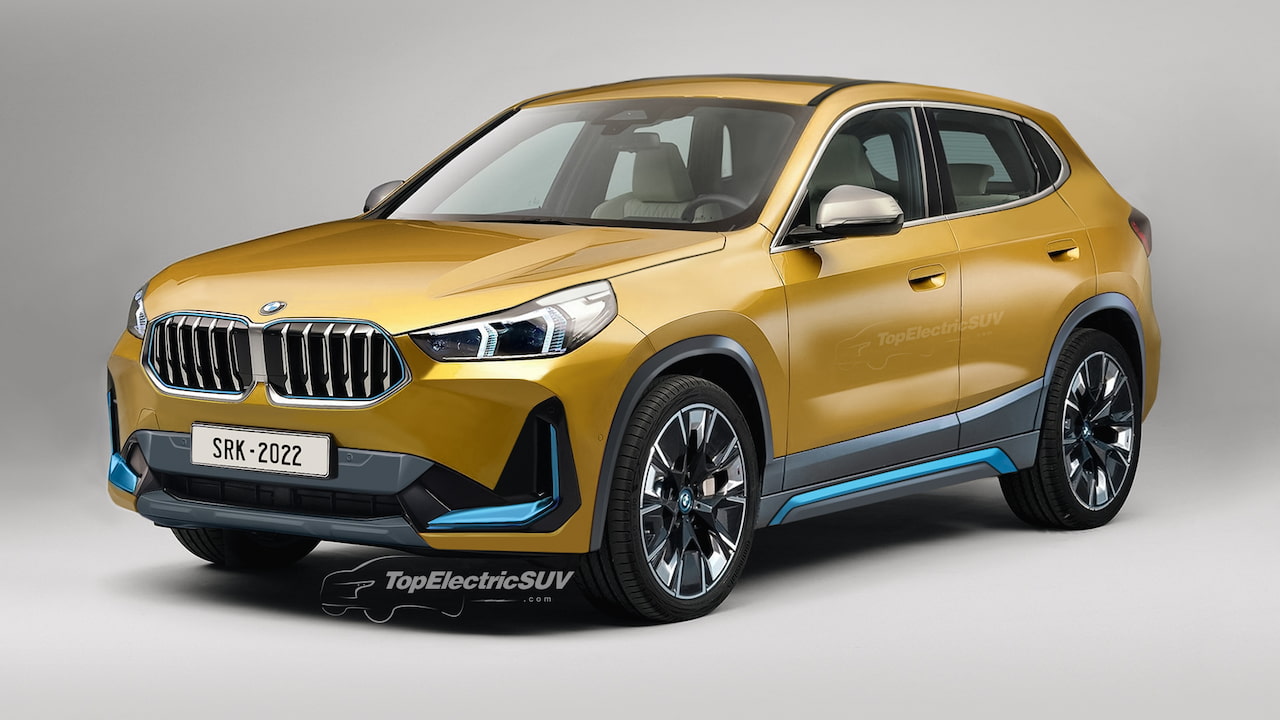 BMW Group plans to have 13 BEVs or pure EVs in its lineup by 2023 to achieve what it terms an ‘ICE ban ready’ status. The range will continue expanding in the mid-decade period and should include a BMW iX2 (BMW X2 Electric), as we discuss in the story.

BMW Group is extending its ‘Power of Choice’ powertrain strategy, under which it offers four types of powertrains: conventional (gasoline/diesel), plug-in hybrid electric, battery-powered pure electric, and hydrogen fuel-cell electric to more models. As a result, the BMW X2 should be available as an EV in the next generation, offering consumers the freedom to drive their favorite Bimmer without exhaust emissions.

Germany’s autobild.de sparked BMW iX2 rumors when it reported in April 2021 that it is one of the company’s secret projects. Its report stated that the BMW iX2 would be an electrified variant of the second-generation X2, which in essence would be a sportier, coupe-styled third-generation BMW X1. The BMW iX1 and BMW iX2, which cater to the entry-level luxury EV segment, are touted to be volume spinners in the company’s expanding EV lineup. Additionally, French publication L’argus claimed that the next-gen BMW X2 will arrive in 2024.

Our BMW iX2 render shows a sleek and stylish SUV that borrows design elements from the first-ever iX1. The rendered iX2 features an almost square BMW kidney grille and flush door handles, and it has a more muscular hood and angular headlights. The electric powertrain of the BMW is subtly hinted at with blue accents on the bumpers, kidney grille, and rocker panels. This gives the car a unique feel without disturbing the design formula.

With short overhangs, a coupe-style roofline, and slim window graphics, the BMW X2 appeals to young and extrovert customers who desire something sportier than the X1. In the incoming model, expect a drag coefficient lower than that of the third-gen X1 (0.27 Cd) and a techier interior with the BMW Curved Display comprising a fully digital instrument cluster and a central screen on a curving, one-piece display, BMW iDrive 8 OS, 5G connectivity, and more.

It’s not only the exterior and the powertrain that the 2024 BMW iX2 will inherit from the iX1. BMW’s future electric SAV is also expected to share the bells and whistles found in the cabin of the iX1.

Expect the 2024 BMW iX2 to feature a BMW-typical driver-focused theme with a sports steering wheel, the BMW Curved Display (10.25 inches for the digital cockpit and 10.7 inches for the central infotainment screen), and a slim climate control panel. The iX2 could get BMW’s new Welcome Scenario function. In configurations shipped with ultra-wideband (UWB) technology, when the driver reaches three meters or closer to the vehicle, a light show using the exterior and interior lights would welcome them. The doors would automatically unlock when the distance drops to about 1.5 meters. The BMW Curved Display would continue the greeting with a customized welcome window once inside the vehicle.

BMW Maps navigation system would be standard in configurations equipped with BMW Live Cockpit Plus. The cloud-based navigation system will likely offer very accurate positioning along with a simple method of destination entry. In addition to real-time traffic data, it would take charging locations on the route also into consideration while making the selection. If there’s a planned mid-journey stop at a fast-charging station, the battery pack would pre-heat to ensure the charging process is as efficient as possible.

An Augmented View function should supplement the navigation system, giving the driver a live video stream from their perspective on the central display. At confusion junctions, the driver would see an animated directional arrow integrated into the video image and ease the turn-off. An overhead interior camera that allows the occupants to take snapshots and capture their memories during the journey will also likely be available in the iX2. These pictures would be accessible through the My BMW App’s remote function. Remote Theft Recorder would record the cabin in case of an incident.

Wide speculation in the media is that the BMW iX2 would share a modified version of the FAAR architecture with the iX1. Originally developed for ICE vehicles (X1, X2, 2 Series Active Tourer, etc.) FAAR architecture is modified to allow 100% electrification.

The BMW iX2 could come in the same variants as the iX1. For reference, BMW has announced the iX1 in an ‘xDrive30’ AWD variant that has a 64.7 kWh battery pack with an energy density of 199 Wh/l and two motors generating 308 hp and 364 lb.-ft. of torque. The iX1 delivers a maximum WLTP range of 440 km (273 miles) in the xDrive30 variant, and thanks to the more aerodynamic body, the iX2 should perform marginally better in the range test. Expect the iX2 to be chargeable at 22 kW (AC)/130 kW (DC).

The first test prototypes of the BMW X2 Electric have been spotted by automotive photographers in Europe. Identified by the “Electrified Vehicle” badge on the doors, and the lack of exhaust tips, the iX2 has started clocking test miles ahead of its possible world debut in 2023.

The guidance as per BMWBlog is that the next-gen X2 (BMW U10) will enter production in November 2023, which means that the all-electric iX2 may go on sale in the first half of 2024. Production of the first-gen X2 has ended, a BMW North America spokesperson confirmed to CarBuzz in October 2022, while also indicating that a second-gen model is in the pipeline.

With the BMW iX1, BMW i7, BMW 5 Series Electric (BMW i5), and MINI Countryman Electric (scheduled to enter production by 2023), BMW Group’s plate is full.

BMW Group plans to offer an EV in 90% of today’s market segments by 2023 and increase that number to 100% by 2030. The company has set a target of making EVs half of global sales by 2030. By the end of 2025, it plans to increase the cumulative sales of its EVs (BEVs) to two million units. In the next ten years, the company (incl. BMW, MINI, and Rolls-Royce brands) aims to have ten million battery-powered EVs on the road.

The BMW iX2 will likely be the smallest electric SUV from the German brand. Designed for young urban customers, it will be available in select markets. It’s possible that BMW won’t offer iX2 in United States due to its expected low range, but it could garner plenty of attention in Europe and other places where it’s sold. Price-wise, it might cost a slight premium over the iX1.

What is the BMW iX2 release date?

We expect the BMW iX2 to launch in the first half of 2024, following the release of the next-gen X2.

Which electric cars would be BMW iX2 rivals?

When it eventually arrives, the iX2 will rival the Volvo C40, Audi Q4 e-tron Sportback and the Lexus RZ.

What is the projected BMW iX2 price?

The BMW X2 Electric should start at under EUR 60,000 in Germany