BMW’s electric offensive, which includes launching 9 new electric models by 2025, has the BMW iX1 as its protagonist. As confirmed last November, the BMW X1, the entry-level crossover in the BMW SUV range, will move to its next generation in 2022. Plant Regensburg in Germany will start manufacturing the new BMW X1 in 2022, which will come available both with a combustion engine and a fully electric powertrain (as the BMW iX1).

New spy shots the web media carried recently revealed that BMW testers and engineers now run prototypes of the electric X1 on European roads, signifying that the project has progressed. The BMW iX1 (codename: BMW U11) will be a basic electric vehicle converted from the third-gen BMW X1 due next year. A few TopElectricSUV.com readers have spotted the combustion model.

TopElectricSUV.com reader Roc Terricabres Esperalba (Instagram) recently spotted a prototype of the 2022 BMW X1 in Germany. A few months ago, reader Ricardo Liebsch Allegro spotted the ICE compact SUV in the brand’s home country. In this story, we discuss all the known aspects and the expectations from BMW’s crossover EV.

The BMW X1 will get an evolutionary redesign with its second lifecycle makeover. Ricardo’s pictures show that the roofline will slope into the rear at a steeper angle making the 2022 BMW X1 and the BMW iX1 sportier.

Road tests of BMW’s upcoming electric SUV have commenced, and underneath the thick camouflage, prototypes could be testing new battery packs of BMW’s fifth-generation eDrive technology. The little design details which peek out of these prototypes point to a more aggressive styling with larger kidney grilles and headlamps. For the BMW iX1, though, the kidney grille is expected to be blanked out (like the BMW iX3) with blue accents. It is not expected to follow the tracks of the iX.

Note that our rendering (above) is constructed inspired by observations made from spy media. The shape of the lights, grille, lower pockets, tow hook cap, windshield, and other elements indicates the production model.

With stronger styling, multiple range options, lower price, and wider availability than the iX3, the BMW iX1 is poised to become the best-selling BMW electric car. According to a report from CAR magazine, the iX1 will have a bespoke cockpit, which could mean bigger and/or more advanced screens and HUD and a distinctive steering wheel.

Interior spy shots floating on the web have revealed the application of BMW Curved Display in the 2022 BMW X1. BMW Curved Display clubs the instrument cluster and central display to form a single curving screen that makes the cockpit even more driver-friendly. These images have shown a single, wide AC vent below the central display, where traditionally BMWs have two small AC vents. Along with employing the new BMW iDrive system running on BMW Operating System 8, expect the designers to trim the number of buttons and switches substantially.

The BMW iX1 may offer the brand’s new-generation navigation with BMW Maps. The cloud-based navigation system should be a part of the BMW Live Cockpit Professional system. BMW Maps calculate the routes and estimated time of arrival or ETA with great precision and speed. The new maps also provide the opening hours, photos, and ratings of the points of interest along the route in detail. They also suggest a more likely route to include an available parking space at the destination and give information about the nearest car park shortly before arrival. Connected Charging should help the driver find charging stations easily. The BMW Digital Key could also be offered on the iX1.

The third generation of the BMW X1, which goes by the codename BMW U11, will be underpinned by the modular FAAR (Frontantriebsarchitektur – which, when translated to English, reads as Front Wheel Drive architecture). The FAAR, a multi-energy platform, is designed from the ground up to be compatible with internal combustion engines, plug-in hybrids, and all-electric.

BMW’s management says that consumers view the multi-energy platform differently from the media or experts who consider EV-exclusive architectures superior. “This purpose-built conversion topic in my opinion is nothing which the customer really discusses. The customer is discussing the design, the brand, and the connectivity and the powertrain,” Jochen Goller, President & CEO, BMW Group Region China, mentioned at the BMW Group Analyst and Investor Day 2021 in March 2021.

BMW doesn’t have many EVs in its lineup right now. The BMW i3, which completed 7 years on the market in 2020, has over 200,000 units to its name. For customers seeking a larger product with all-electric capability, the next (and only) offering is the recently launched BMW iX3 (if you count out the Mini Cooper SE). However, the USA does not get this BMW electric SUV, with its availability restricted to China and Europe.

In future, models such as the high-volume BMW 5 Series and the X1 as well as the BMW 7 Series will be available with four different types of drivetrain – all-electric, plug-in hybrid, petrol and diesel.

Excerpt from the BMW Group Report 2020

The push to launch an affordable BMW electric vehicle in the U.S., such as the iX1, could not come sooner as the brand is seeing sales of its electric range drop in the States (BMW has stopped reporting sales numbers of its EVs in the USA, it only releases the percentage of drop). Since the i3 has no planned successor and given the global market’s heavy appetite for crossovers, the iX1 could take on the mantle as the entry-level BMW EV.

German auto journal Automobilewoche had reported that the BMW iX1 should replace i3, though as its successor, it only fits requirements to a limited extent. As an SUV, the electric X1 would be bigger and more spacious than a city runabout. Nevertheless, the ‘i’ SUV is visually upgraded and aerodynamically enhanced, providing it somewhat with an independent character.

On November 18, 2020, BMW Group announced that the Leipzig and Regensburg factories are currently setting up equipment to produce battery modules and high-voltage batteries starting in 2021. This development is directly related to the iX1, as BMW Group plans to manufacture it in Regensburg.

The BMW iX1 should feature the same 400-volt system as the current wave of electric Bimmers. BMW Group is expected to have its 800-volt battery system ready when it introduces Die Neue Klasse EVs in 2025. Don’t expect the iX1 to support rapid charging at 350 kW; 200 kW could be the maximum charging capacity for the compact electric SUV.

Oliver Zipse, the Chairman of BMW Group’s Board of Management, said during the Q2 2021 earnings conference call in August that the company will offer at least one EV option in nearly all its segments by 2023. He confirmed that a pure electric X1 is in the triad of EV launched by mid-2023.

New models will be coming in rapid succession from here on: In the next two years, we will launch all-electric versions of the BMW 7 Series, X1 and 5 Series.

By 2030, BMW Group plans to sell a total of about ten million pure electric vehicles globally. This target presumably includes the volume of the MINI and Rolls-Royce brands as well. MINI will become the Group’s first all-electric brand from the early 2030s.

Automobilwoche has reported that the production of the BMW iX1 will start at the end of 2022. As per Bimmerpost forum member ynguldyn, the next-gen X1 series (U11) production will begin in July 2022. Expect customer deliveries of the iX1 to begin by the first half of 2023, preceded by the combustion variants.

What is the BMW iX1 electric release date?

Customer deliveries of the BMW iX1 are expected to begin in the first half of 2023.

Which electric cars are considered as BMW iX1 rivals?

The BMW iX1 will rival the Tesla Model Y, Volvo XC40 Recharge, and the Mercedes EQB.

What is the estimated BMW iX1 price?

The price of the base iX1 is expected around EUR 54,000 in the European market. 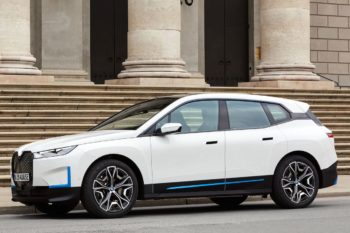